Custom jewelry and online jewels
The specialty of The MeriTomasa's Treasures Factory are tailor-made jewelry for all tastes and pockets. This month the first 10 orders go with twice as much love as a gift!

“We have only communicated by e-mail with Meri and from the first day to the last the treatment has been fabulous. She makes it possible that online commerce can also be local. I sent her a sketch and she turned it into reality. Shipping and delivery were successful. I think when Meri chose the name of the treasures factory she couldn't get any more right. Thank you for turning our ideas into tangible objects full of love, illusion and happiness! We will repeat for sure!”

“I had been behind the Atlantis Ring for years, but what I had seen did not fill me... Finally, searching and comparing I came to your page, I read it all and saw the video of how you make the rings. "The Treasure" is true to your description (you do not skimp on material): it is thick and solid and the truth is, it is the one I have always looked for, one that will reach me... I have bought three, for me, my daughter and my daughter-in-law . We all loved it and we never take it off. I wish you a lot of success in your business, that you continue with that interest that you put in your work and I thank for having bought one of your treasures. NAMASTÉ”

“Meri has been great working with! Truly PROFESSIONAL. Exquisite treatment, it was super easy thanks to their recommendations and experience to come up with an idea that we were not sure was feasible. We are delighted with our alliances (they are us), and with somewhat complicated dates :-S Eskerrik asko MERI!! We will be back to work on an upcoming "treasure"!!!” 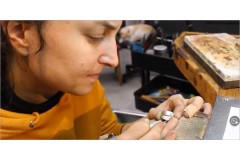 The gold and silver version (yellow or rose) is one of the ones I sell the most as wedding bands. It is a premium version, along with the 18kt gold versions (yellow or rose) and the three golds. The gold and silver version is modeled in 18kt gold and sterling silver. But the most important thing, once again, is that I make them by hand, one by one, in my workshop at The MeriTomasa's Treasures Factory. In this video I tell you how... 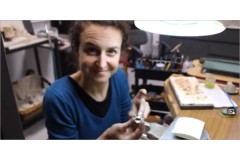 I always say that I make my Atlantis Rings one by one in my workshop, that they are not bought wholesale in any distant country, that my business is not to be an artist but an artisan, and that I am not an esoteric website but a handmade jewelry with own workshop and online store. And the other day they told me: you say it a lot, but... what if instead of saying it you show it? Well there we are. A video is worth a thousand words. 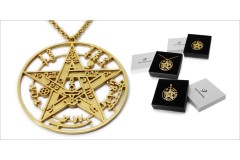 What do the symbols of the Tetragrammaton mean?

The tetragrammaton is a compendium of the main symbols of Judaism and Christianity, covering the ancient world, the classical age and the Middle Ages. It synthesizes the pagan substratum of the West, esotericism, alchemy, magic and the occult, Christian mysticism, the Jewish Kabbalah and Latin American spirituality. 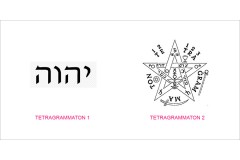 What is the tetragrammaton?

There is not one tetragrammaton: there are two. In fact, they are two different things. On one side is the "tetragrammaton" which literally means "four letters" and refers to the four letters with which the early Jews referred to Yahweh, the God of Israel and later of the Christians. On the other hand, there is the jewel that, among many other Jewish and Christian symbols, contains those four letters that make up the name of Yahveh.