> Collections> Moreneta>Medal of the Moreneta, Virgin of Montserrat, in Silver

Medal of the Moreneta, Virgin of Montserrat, in Silver

Medal of the Virgin of Montserrat, the Moreneta, in sterling silver, personalized with name and date of birth on the edge. On the reverse, knight Sant Jordi.

Artisanal elaboration and modernized exclusive design inspired by traditional Catalan medals, with the two patron saints of Catalunya, La Moreneta and Sant Jordi, side by side on your medal. A treasure to wear for a lifetime.

You can choose it in a polished or aged finish, and with a silver chain or nylon cord. In addition, you can also choose the gold version.

Unique piece. Not for sale, but I can design a custom one for you: Fill out the form and send you quote!

Send me a message!
Contact MeriTomasa
and I send you your budget
without any obligation

And why is La Moreneta black? About the Virgin of Montserrat, a virgin from the frontier, multicultural and mixed-race, Christian and Saracen. A Rosalía from the year 1000 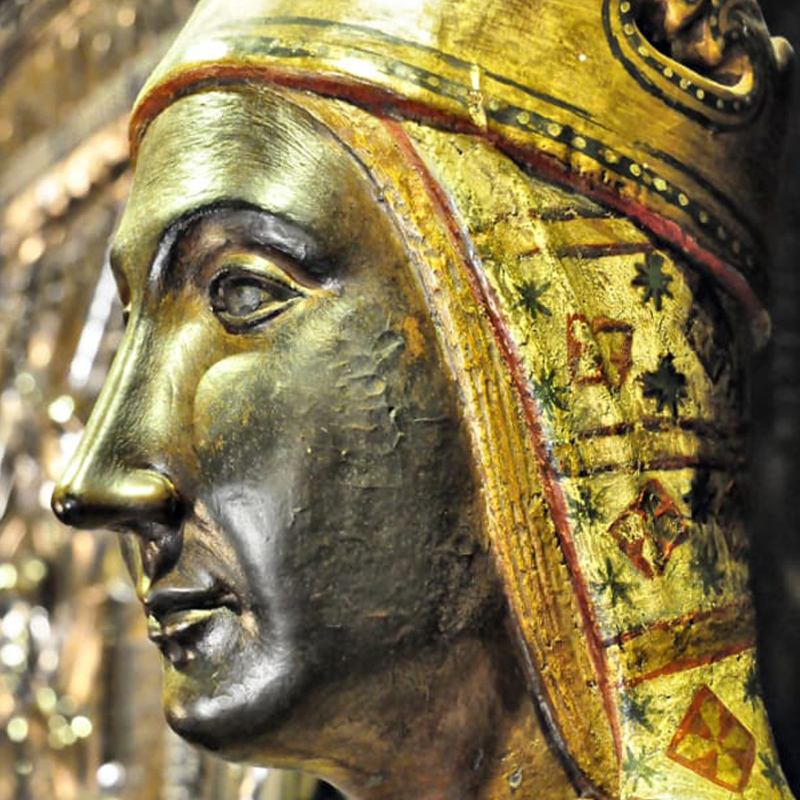 Detail of the face of the Moreneta, Virgin of Montserrat, with her close smile, the polychrome cordovan handkerchief and brown skin.

The usual explanation for the reason for the dark skin of the Moreneta is that the smoke from the candles turned the polychrome white virgin into black, or that when this polychrome was lost, a layer of bitumen appeared that protected the wood of the original carving. None of these theories, however, explains why black virgins are so common in Latin and southern Europe. That is why the theories that argue that black virgins have their origin in female fertility deities, spread throughout the Roman Empire and with origins in previous cultures, such as Isis, Cibeles or Artemis, all of them with dark skin.

Some say that his brown skin is due to the smoke from the candles or the bitumen under his polychromy, but it is much more credible that the Black Virgin of Montserrat was a deity happily "found" by the Christian hosts that conquered Catalonia. Her brown skin and her polychrome scarf are attributes of a frontier virgin, multicultural and mixed-race, Christian and Saracen. She is a Rosalía from the year 1000.

Quite possibly, the Virgin of Montserrat was conceived with her dark skin since her "discovery", documented in the 9th century. Catalonia was a land of conquest and at the dawn of the 1000s the Frankish peoples who came from the north were fighting for it against the Muslim peoples who came from the south. Montserrat was, precisely, a border between one and the other. As in any conquest, the newcomers "baptize" the gods of the conquered peoples, and therefore it is easy to suppose that the legend of the three little shepherds who find a black virgin in the magical mountain of Montserrat has much of a happy chance to evangelize to the indigenous population that inhabited that border between the arrival of the Christians from the north and the flight of the Muslims from the south.

La Moreneta therefore has a lot of those cosmopolitan, multicultural and mixed-race virgins from the frontier, with attributes of a Christian virgin, and no less of a Saracen girl, such as her dark skin or the polychrome scarf that falls under her crown..

La Moreneta is a Rosalía from the year 1000: now we reverence celebrities and famous singers. In the year 1000, virgins and warriors were more fashionable. Sant Jordi is like C. Tangana or Rawl Alejandro from the 9th century. My design proposal for the Moreneta medal also has that combination of tradition and modernity.

It is exactly the same phenomenon that occurs later in America, after the conquest by the Spanish who "baptize" the indigenous deities and turn them into Christian virgins . In that sense, a black virgin like Moreneta was the ideal solution to replace the cult of Pachamama with a "deity" according to the religion of the conquerors. As a historical revenge, both La Moreneta and Pachamama would surely be good friends today. Both were frontier goddesses, coming from heaven to protect the peoples of the earth in their warm laps. Being Christian, La Moreneta has a lot of Muslim and pre-Columbian. 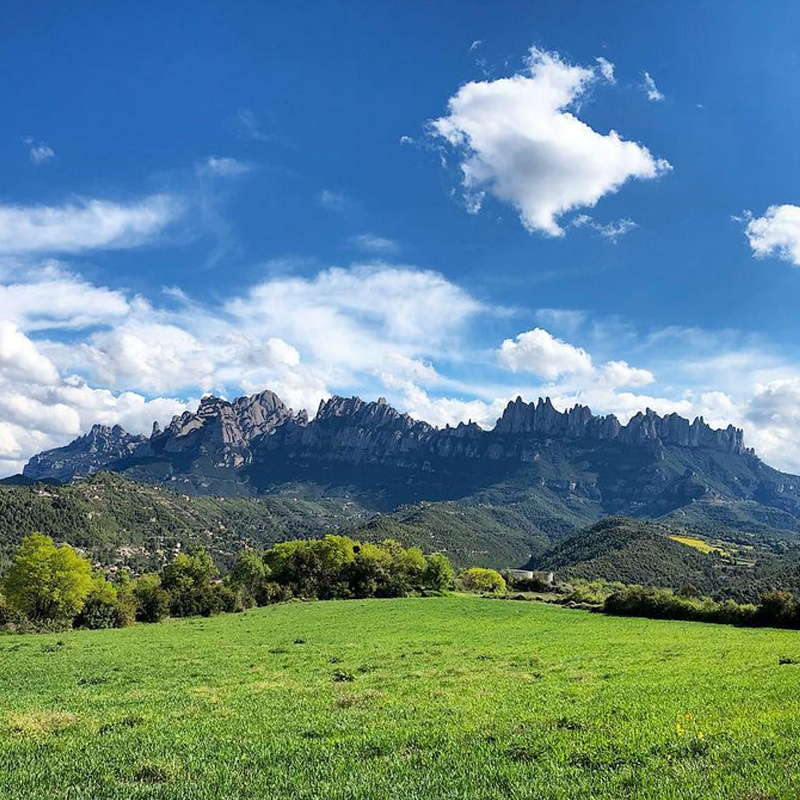 The silhouette of the magical mountain of Montserrat, silhouetted on the horizon, seen from Manresa, showing its most typical profile on its north face.

The black virgin of Montserrat, the Moreneta, is my favorite Virgin. I have lived under her gaze, in Manresa, all my life, knowing her on the horizon, on her magical mountain, silhouetted against the profile of the world when the sun goes down, and after many years of carrying her in my heart and showing her off in the footer of my website, I make it a collection. I start with the medal, in sterling silver and 18kt gold, personalized with your name and date of birth, in a MeriTomasa version of the medals of a lifetime. On the back, I am accompanied by the knight Sant Jordi, to offer you a typically Catalan treasure.

I have one of those medals. And my brothers Isidro and Eva too (they both help me a lot at The MeriTomasa's Treasures Factory: Eva is my favorite fairy when I need a handyman in the workshop, and Isidro is my fairy to work on my website, as in these texts, although sometimes he does very daring pirouettes comparing black virgins with Rosalías :-) The three brothers have our medal because they gave it to us as children, when we were baptized. They are medals for life. Designed to be a memory for generations to come. This is my proposal for a La Moreneta medal, with an exclusive modern design but based on the traditional and artisanal elaboration.

The Black Virgin of Montserrat is the patron saint of Catalonia and a very beloved virgin in this small country and also around the world (she has many fans in many places in Latin America), but if somewhere we really love her, it is in Manresa: thanks to she the city overcame the black plague and excommunication on February 21, 1345, after long years of hardship, when the very black Virgin of Montserrat performed the Miracle of Light: a mysterious light from Montserrat pierced the stained glass windows of the old church of Carme at the same time that the bells began to ring alone. In this way the city managed to overcome the will of the stubborn bishop of Vic, who had excommunicated the city because of his opposition to the Manresa ditch crossing the lands of the bishopric to supply the city. The canal used to channel the water of the Llobregat from Balsareny to Manresa and, with its construction, the water shortage that Manresa suffered came to an end.

Are you looking for jewelry online with own workshop to turn that jewel that surrounds you into precious metal? You design your custom-made treasure. I am your jeweler hands. 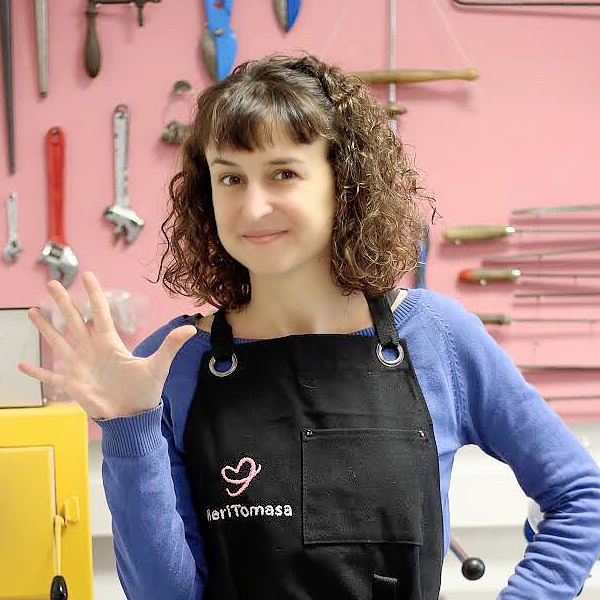 Myself, in my jewelry workshop in Manresa, celebrating my first five years at The MeriTomasa's Treasures Factory.

Cristian entrusted me with a gold medal of the Virgin of Montserrat as another that he had lost and that he had since childhood. It was my first Moreneta medal. Many more have come behind.

This is one of my favorite formulas at The MeriTomasa's Treasures Factory. You design your jewelry. I am your jeweler hands.

My mission as a jeweler is to offer you treasures such as the medal of the Moreneta in the form of top quality jewelery, both in relation to the precious metals that make them up and in the design, modeling and finishing process.

Many of the MeriTomasa treasures that you will find on my website were born like this, like a personalized jewel that a client asked me one fine day. Then I have published them on this same website and, sometimes, they have a life of their own. Behind an order comes another and in the end I make up my mind and make a standard proposal to be able to offer you faster processing times and prices that are also a little tighter.

My mission as a jeweler is to offer you treasures such as Moreneta Collection in the form of top quality jewelery, both in relation to the precious metals that make them up and in relation to the design, modeling and finishing process. And also, do it from craftsmanship and humility. I do not manufacture in series in distant countries and I do not sell wholesale: I offer you handmade jewelry at fair prices.

The MeriTomasa's Treasures Factory is specialized in custom made jewelry for all tastes and budgets: wedding rings, headbands, earrings, pendants, brooches, bracelets, rings, tiaras... My value proposition is to create quality jewelry, designed and manufactured by hand, with a focus on personalization. That is why I join campaigns like Fashion Revolution or I amb proud of being accredited with the craft product (D'A) distinctive, which certifies that my jewelry is of own production and they are made by hand using the processes of my trade and produced in my workshop in Manresa, kilometer zero. I offer a more intimate, romantic, exclusive and quality jewelry.

The MeriTomasa's Treasures Factory is specialized in custom jewelery tailored to suit all tastes and budgets: wedding rings, headbands, earrings, pendants, brooches, bracelets, rings, tiaras... My value proposition is to create products where it is you who decides the shape, materials, finishes... That you can be part of the manufacturing process and thus begin to fill the object with something more sensitive than the lavishness that metal brings. It is a more intimate, romantic, exclusive and quality work.

So don't think about it any more: fill in the form and tell me what is your idea. I will answer you with a budget and without any obligation. Everything is possible at The MeriTomasa's Treasures Factory!