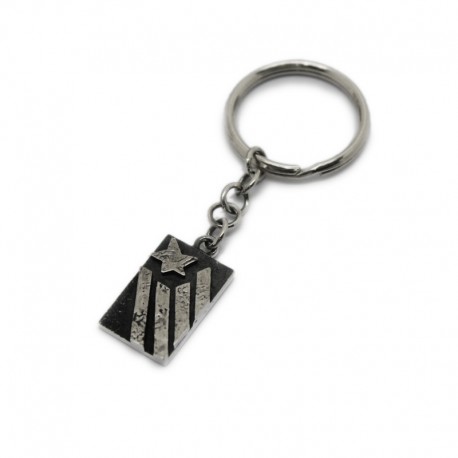 Keychain with the Catalan starred flag. Estelada Collection: sterling silver, with a crosslinked texture, darker in the background and lighter in the estelada, to give volume to each treasure.

The whole piece, including the keychain, is made of sterling silver (I don't use metal keychains with a silver plating).

Kilometer zero: limited series designed and modeled in my workshop in Manresa.

The starred flag and the Catalan independence movement

The estelada flag, senyera estelada or simply estelada (in English, "starred flag" or "lone star flag", from estel, "star") is the symbol of reference of the independence movement of Catalonia and of the Catalan Countries. Its history goes back a long way, but since the 2010 demonstration against the cut of the Catalan Statute by the Spanish Constitutional Court and the successive pro-independence demonstrations of the ANC and Òmnium from 2012 onwards, it has become the reference symbol of the independence movement to decorate the facades and balconies of many Catalans.

Its origin dates back to the beginning of the 20th century and is considered Vicenç Albert Ballester as its creator or inspirer. It was born from the merger of the Senyera with the triangle with the star of the flag of Cuba and that of Puerto Rico. The blue color also refers to the republican symbology of the French revolution, which was also adopted by the independence fighters of the United States of America. The blue triangle represents the blue of the sky, humanity, in the center of which the white star of freedom shines. The President Macià boosted its popularity by using it as a reference flag successively of Estat Català and Esquerra Republicana de Catalunya.

In 1968, with the founding of the PSAN, Partit Socialista d'Alliberament Nacional, the estelada was adapted to Marxist ideology, with the red star and the background of the white triangle first and finally yellow.

In general, it is considered that the blue star is not connoted (it is pro-independence, but it is not defined neither on the right nor on the left). Instead, the red version is pro-independence and left-wing. Currently there are starry designs to bore. Anarchist, ecologist, gay, that of Santa Eulalia, that of Barça, Espanyol or Joventut de Badalona... but almost all agree on starting from the Senyera to add a star on top of a triangle. The Estelada Collection by MeriTomasa offers you a sterling silver version, with darkened corners and a show of treasures to show off: pin, bracelet, ring, earrings and keychain.

Sterling silver with a crosslinked texture, darker in the background and lighter in the estelada, to give volume to each piece. Kilometer zero: designed and modeled in my workshop in Manresa 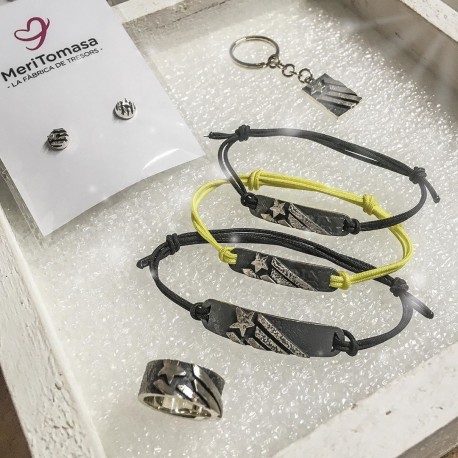 The Estelada Collection consists of a set of sterling silver treasures (pin, bracelet, ring, earrings and keychain) that share the estelada flag as a motif. Finishes with crosslinked texture, darker in the background and lighter in the estelada, to intensify the three-dimensional modeling of each piece. The diagonal design allows the star and the four bars to be accommodated in the small spaces of each jewel, while giving dynamism to the pieces.

It is a collection designed and modeled in my workshop in Manresa (Barcelona), based on custom jewelry orders such as the custom Catalan Estelada Bracelet, created in 2014. Especially since September 2017, and even more so since October 1 , the prison of the Jordis and the consellers of the Govern and the application of 155, I have received dozens of emails to have a similar one. Doing a little seriation allows me to offer it to you at cheaper prices and send it home in much shorter time frames. In any case, you can boast of wearing a jewel kilometer zero of artisanal manufacturing.

Idea per no perdre les claus