> Blog>Eliphas Lévi, creator of the tetragrammaton

Eliphas Lévi, creator of the tetragrammaton 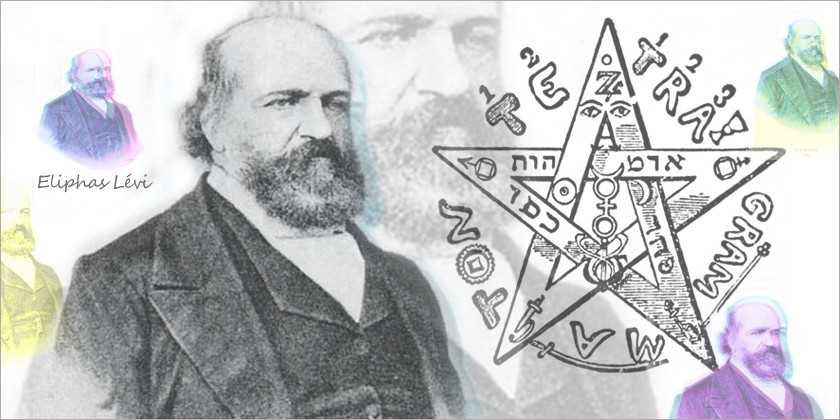 If you have taken a look on the Internet, surely you have seen a lot of pages that talk about the esoteric pentagram, the tetragrammaton, and they tell you that it is a compendium of ancient symbols, used by the ancient Jews of the year 840 BC , or the first Christians in the catacombs and the alchemists of the Middle Ages. False. All wrong. Fake news :-). On the Internet it is very easy to copy a little from here and a little from there to create content without knowing much about what is being talked about...

In reality, the tetragrammaton is often confused in its most original sense, the name of God written in Hebrew, which was actually born many centuries before Christ, with the esoteric figure of the tetragrammaton, which is a magical figure that brings together the main symbols of Judaism and Christianity in a pentagram. I tell you about it in my post: What is the tetragrammaton?

But, and then… Who created the esoteric figure of the tetragrammaton? And in what year? Was it many centuries before Christ, in the Hebrew Torah? Was it when the Romans, while the Christians hid in the catacombs? Was it in the Middle Ages, to exorcise the black plague and other calamities? Was it invented by the architects who built Westminster Abbey and placed the famous pentagram in the west window of the south wing? Or was it perhaps a creation of the Renaissance, in the new awakening of humanism? Or is it even later, a late fruit of the Enlightenment?

The creator of the tetragrammaton has a name and surname. This is Eliphas Lévi, which is a pseudonym of the French occult scholar, magician and writer Alphonse Louis Constant (1810-1875). In the photo above, you will see a photo of him from 1862, a few years after creating the tetragrammaton: Eliphas Lévi created the tetragrammaton between 1851 and 1854, including it in the publication of his most popular book: “Dogma and ritual of high magic” (in the original French: “Dogme et rituel de la haute magie”).

Therefore, neither alchemists of the Middle Ages, nor the year 3000 BC. The tetragrammaton is a much more modern invention, from the mid-nineteenth century, but that does not detract from its value, quite the contrary: the tetragrammaton is precisely the compendium of those many centuries of history of the Abrahamic religions such as Christianity and Judaism, and from the classical and previously pagan grounds on which they are based, carefully synthesized with the filter of Lévi's erudition in his tetragrammaton.

Who was Eliphas Lévi?

Eliphas Lévi was the son of a very poor family and entered the seminary to become a priest and carve out a future for himself. There he began his studies in theology, which he would complete in a lifetime of scholarship, but he did not enter the priesthood. He is known as a learned scholar, deeply knowledgeable about the Kabbalah and the Bible, but also of the divinatory arts, especially the Tarot, and the Occult Sciences. He had contact with Rosicrucian circles in England and with Freemasonry in France, and was a private teacher of Occult Sciences to other scholars, nobles and priests. He also met and befriended great political and cultural personalities of his time, such as Flora Tristán, Honoré de Balzac, Alejandro Dumas or Victor Hugo.

Lévi is considered one of the founding fathers of modern occultism. The occult sciences derive from the study of magic and ancient divinatory arts, which during the long period of the Middle Ages and modern times were persecuted by the Inquisition.

In the France of the 19th century, under the spirit of the Enlightenment, interest in the knowledge of the occult arose again, in the sense that this knowledge that, due to having been persecuted for so many centuries, had remained hidden to science and public knowledge. But that interest resurfaces not in the form of superstition, but with that same breath of the Enlightenment and therefore oriented towards a scientific study of the occult.

Eliphas Lévi is known precisely for his enthusiasm for science and erudition: «Faith is nothing more than superstition and madness if it is not based on reason, and what is unknown cannot be assumed except by analogy with what is known. Defining what is not known is presumptuous ignorance; positively affirming what is ignored is lying. (Dogme et rituel de la haute magie).

When we say that Lévi is the father of modern occultism… does that mean he was a sorcerer?

On the contrary. The magic that Lévi investigates is not that of the spell, the bewitchment or the game of cards. Lévi seeks a science of the occult: a consistent series of knowledge extracted from the sacred scriptures (especially Hebrew and Christian) to obtain the secrets of the beyond and obtain its grace and blessing.

Eliphas Lévi is not a sorcerer: he is a deep believer of intimate Catholic conviction who also treasures an extensive knowledge of the sacred scriptures.

Lévi's main thesis is that all great religions share an esoteric tradition that is universal: a compendium of the science of magic that underlies all religions.

This concept of esotericism as the source of all religions is original to Lévi and was later used by other prominent esotericists such as Madame Blavatsky and Papus. In fact, Lévi invents precisely the term “occultism” and gives it its scientific and opposite orientation to the talk of magicians and hair-growth sellers.

For Lévi, occultism is above all the study and profound knowledge of religions, especially the Jewish Kabbalah and the Christian Bible, but also divinatory arts, such as the Tarot, capable of explaining the mysteries of humanity to the initiates. In short, Lévi seeks a science of the occult that incorporates the common wisdom of the great religions.

What is the "Dogma and ritual of high magic" about?

The title is very explanatory:

In short, if Eliphas had been writing today, he probably would have titled his book “Theory and Practice of Occult Magic”.

Among these formulas and invocations included in the “practice” part is the tetragrammaton, which Eliphas presents in chapter "5 E. The pentagram. —The microcosm and its sign. —Power over the elements and over the spirits .".

At the beginning of the chapter appears the famous drawing of the esoteric pentagram that you will see in the image of this post, and on which the esoteric pattern of the tetragrammaton is defined to this day. Eliphas summarizes its function with the following words: "The pentagram expresses the domination of the spirit over the elements and it is through this sign that the demons of the air, the spirits of fire, the specters of water are chained. and the ghosts of the earth".

And he describes it with these others: "the pentagram is what in Kabbalah is called the sign of the microcosm, whose power Goethe extols in Faust's beautiful monologue (...) A sign that summarizes, expressing them, all the hidden forces of nature.A sign that has always manifested to the elemental spirits and to others a power superior to their nature, which instills fear and respect in them and forces them to obey, through the rule of science and of the will over ignorance and weakness". Il tell you all the details in my post What do the symbols of the Tetragrammaton mean?

The main difference between my tetragrammatons compared to serial productions that you can find on other websites is the quality and craftsmanship. I only work with noble metals (18k gold, sterling silver and electrolytic copper). And I make each piece by hand. The result is a unique and quality treasure. Stronger and more durable.

The various Tetragrammaton models from The MeriTomasa's Treasures Factory share a design faithful to the original. The only thing that changes is the metal:

And you, have you already chosen your tetragrammaton?